Chapter 1 – From Heaven To Hell

So, this is what I have become: a suicidal, brain damaged, bipolar, porn addict, verbally abusive, crazy husband and father. In other words, a hopeless failure who has become a burden to my family. That is, after all, why I am planning to end my life on this Indiana state road. Here’s the plan. When the next semi approaches, I’m going to slowly veer over the center line making it look like I’ve fallen asleep. There need to be witnesses so they can say that’s what happened and so my wife can still collect life insurance since this won’t appear to be a suicide. Surely the semi driver himself will survive and be the first witness. I can hear him now, “He just came right over the line. He looked like he had fallen asleep. There was nothing I could do to avoid him!” And from my perspective, it would be a final goodbye to all this pain. I can see myself going through the steering wheel and dash of my own car, and entering an eternity of rest…finally.

Here it comes! A semi! Have I taken care of everything? Maria and the children should be fine…right? Steady now… It’s getting closer. 3……2……

It hadn’t always been this way. Times had been good many years earlier. But it all had taken a dark turn. My journey down this road, peering into the headlights of this semi, had actually started back in 1989. That summer my parents, sister, and I had moved to Brooksville, FL. My dad had accepted a position there as the assistant pastor at Brooksville Wesleyan Church. Those five years of my life (ages 12-17) that we had lived in Florida were blessed in every sense of the word. The Brooksville Wesleyan church sat on the edge of a retirement center called The Wesleyan Village. My sister and I used to ride our bikes around the village looking for lizards and enjoying the ponds. Everyone in the village knew us. It was like having 200 sets of grandparents.

We attended a small Christian School called Hernando Christian Academy where we developed some great friendships. My best friend was Daniel Murray. Dan and I took taekwondo together, played saxophones in our small school band, and often spent the night at each other’s houses pretending to be ninjas out in our yards. One time our neighbor lady called my mother because she “saw someone outside sneaking around the house”. Apparently we weren’t very good ninjas, though we both got our black belts in taekwondo a few years later. 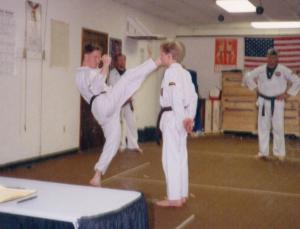 David Kicking Rolled Up Paper out of Dan’s Earsat their Black Belt Pretest.

The Gulf of Mexico was only a few miles from our house so my family went there often for picnics. Even better than the beach, however, was that we had annual passports to Disney World. Florida residents could get these special tickets that allowed them into Disney World for free 365 days a year. So for three of the five years that we lived in Florida, we literally went to Disney World every other weekend. As a young teenager, Disney World was my playground.

When I turned 16, though, I had a new priority, and her name was Katy. Katy had been in my class at school ever since I moved to Florida, but in our sophomore year of high school I asked Katy if she’d like to go on a date. I took her to a revival service at our church and then to Dairy Queen afterwards. (I didn’t know at the time she was lactose intolerant…oops.) That date started the beginning of a very strong relationship between Katy and me (in spite of the Dairy Queen incident…).

Katy and I were both Christians, and she would often attend church with me on Sunday evenings. On Friday nights, we used to go over to her neighbor’s house in the woods and watch the X-Files with all the lights turned off. That was a pretty creepy show, which made the walk back to her house, through the woods, in the dark, another weekly adventure.

It seemed that Katy and I were always together. Our entire sophomore class only had around 15 people in it, and when we weren’t in school we were often hanging out at each other’s houses. If someone saw me without Katy, they’d ask me where she was. Though I was truly in love with Katy, I admit that I also had fallen in love with being in love. Even though we were only teenagers our relationship was becoming very serious. We often talked about our future plans to get married after college.

My parents grew concerned with how much time I was investing in Katy and suggested that I back off a little. These cautions increased considerably after the senior pastor at our church announced his retirement. His announcement caught me totally off guard. You see, when the senior pastor in a Wesleyan church resigned that meant the entire staff must also resign. This was so that the new pastor coming in could begin with his or her own fresh staff. This meant that my dad, as the assistant pastor, would also be resigning.

I did not heed my parents’ warning about backing off from Katy but instead clung to her even more on an emotional level. She became my world in those last few months of living in Florida. My hope was that my father would either accept an invitation from the Brooksville Wesleyan Church to stay, maybe even as the senior pastor which was a possibility, or maybe transition to another church in central Florida. To my horror, however, he ended up accepting a pastorate at a church in Ohio…  Ohio!!! There was no beach, no Disney World, no Dan, and especially no Katy in Ohio!

I stayed at Katy’s house very late into the evening that last night in Florida. The dreaded time for me to leave had finally come, and I kissed her goodbye. I tried not to look back as I drove down her long driveway through the woods for the last time, and when my tires hit the pavement of that country road, I began to scream at the top of my lungs, “Why, God?! Why?!”

As I drove through those country roads, I screamed my heart out at God. I was watching God rob me of everything I loved. Everything I now held dear would soon only be a memory, and I was powerless to change it. Something happened in me that night. I felt like two hands reached into the top of my skull and ripped my body in half, leaving only a spirit floating in some emotionless void.

That moment with invisible hands tearing me apart would come back to haunt me for years to come. Though I didn’t know exactly what was happening at the time, it was a pivotal moment in my life. It had punched a hole in the dam of my sanity that would start to leak from this day forward.

What I did know is that Florida had been my own personal heaven, and I felt as though I was now entering hell itself.

I had no idea how true this was.